HCU is a rare condition that interferes with your body’s ability to break down a protein from the food you eat. Protein is made of smaller building blocks called amino acids. Normally, your body processes these aminoacids into energy for everything you do. When you have HCU, your body can’t break down (metabolize) an aminoacid called methionine. If left untreated, this acid and another called homocysteine build up in your bloodstream and can cause serious problems.

HCU,  is similar to  Phenylketonuria (PKU),  Methylmalonic Acidemia(MMA)  and Tyrosinemia. Each of these disorders require food products which are low in particular types of amino-acids. i.e. Methonine in the case of HCU, Phenylalanine in the case of PKU.

Homocystinuria is an inborn error of methionine metabolism and was discovered in 1962 independently in Northern Ireland by Carson and Neill and in the United States by Gerritsen et al. The basic defect was defined by Mudd and his co-workers in 1964 as a deficiency of the hepatic enzyme Cystathionine ß Synthase. ( Nina A.J. Carson, The Treatment of Inherited Metabolic Disorders)

A simple explanation of the disorders such as  HCU  is given below. Methionine, an amino acid, which is present in regular food protein undergoes the following steps in digestion in the body 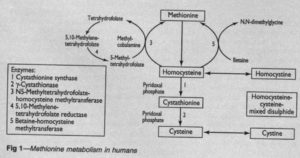 In classical Homocystinuria, conversion of Methonine to Homocyst(e)ine takes place without any problem but Homocyst(e)ine to Cyst(e)ine does not happen because of the absence of the enzyme, Cystathionine beta synthase. Homocyst(e)ine  is not converted to form Cyst(e)ine. This leads to accumulation of  Homocyst(e)ine, which is toxic, and  deficiency of Cyst(e)ine, which is an essential amino acid in Homocystinuria patients. ( In healthy individual, Cyst(e)ine is made by the body but since HCU patients do not make this amino acid in their body it needs to be supplemented). In order to reduce the toxicity of accumulated Homocyst(e)ine, only low-protein diet products which are low in  Methonine are given regularly. The protein required to maintain proper growth, is given in the form of supplement which is free from  Methionine.

What do you do:

Since protein in the food contains all amino acids including Methionine, mainly low-protein foods are used for your regular meals. Since protein is essential for the body, all other amino acids except methionine is taken additionally. This is very important and it is not a supplement such as a vitamin. It is necessary for the survival and it is also called as ‘formula’.

What happens if you do not follow the diet:

This leads to accumulation of  Homocyst(e)ine, which is toxic. This can lead to stroke, eye lens dislocation, mental retardation, seizures and many other serious problems, including death.

Patients with HCU inherit two defective copies of the gene from their parents(carriers). So each time their parents have a child they have a 1 in 4 chance of having a child with Homocystinuria. 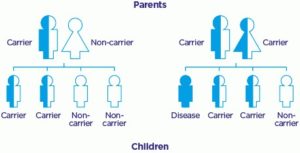